Last Wednesday, March 8th, we shared with Patrons on our Patreon page a special post highlighting several strong women characters from Last Ember Press. We felt it was an important post to share with everyone, though, so now we are happy to share with you The Women of LEP!

In honor of International Women’s Day, we wanted to showcase some of our strong female characters and creators within Last Ember Press!
Let’s start with our main character… 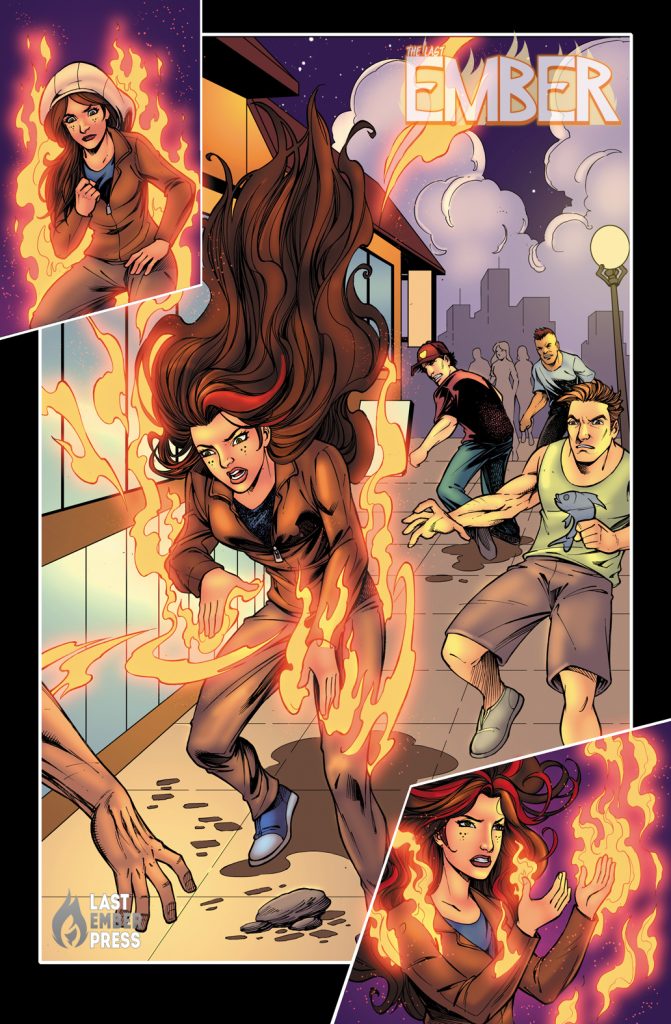 EMBER
Ember is the matriarch of the Emberverse, the first to come into power that we know of. Last in a long line of fire goddesses, she’ll learn what it takes to helm that responsibility while keeping her grades up and her family together!
The reason Ember is such a strong character is her resolve. She’s not entirely sure where her life is taking her, but when she’s thrown a curve ball she finds a way to make it work. She’s strong, independent, self sufficient, and somehow maintains a loving spirit and kind heart through it all. She’s not perfect, but then that would be boring!
http://lastemberpress.com/comics/ember/ 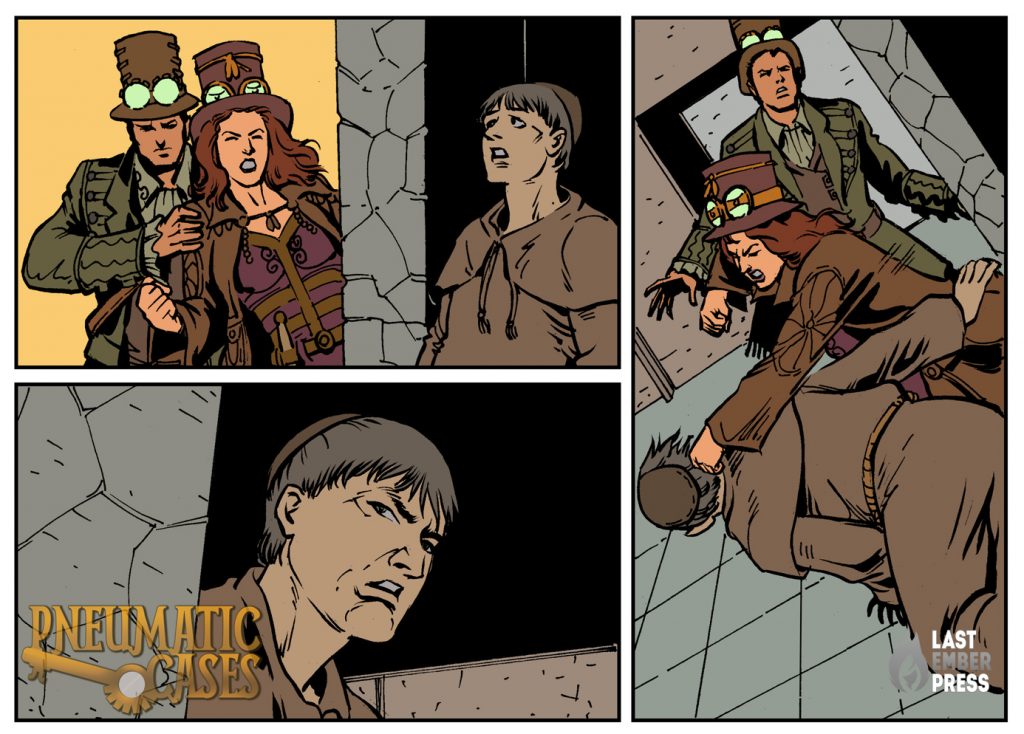 LADY ANASTASIA RAVENSCROFT
In a time when men were considered superior and a lady’s goal was to marry a wealthy man of good stature you didn’t often see anyone like Lady Anastasia. Tough as nails, as blunt as they come, and never backing down to any man, this brilliant scientist and detective would give anyone a run for their money. She never takes no for an answer, and no one tells her what she can or can’t do, as evidenced by her altercation with the monk in the above image!
http://lastemberpress.com/comics/pneumatic-cases/ 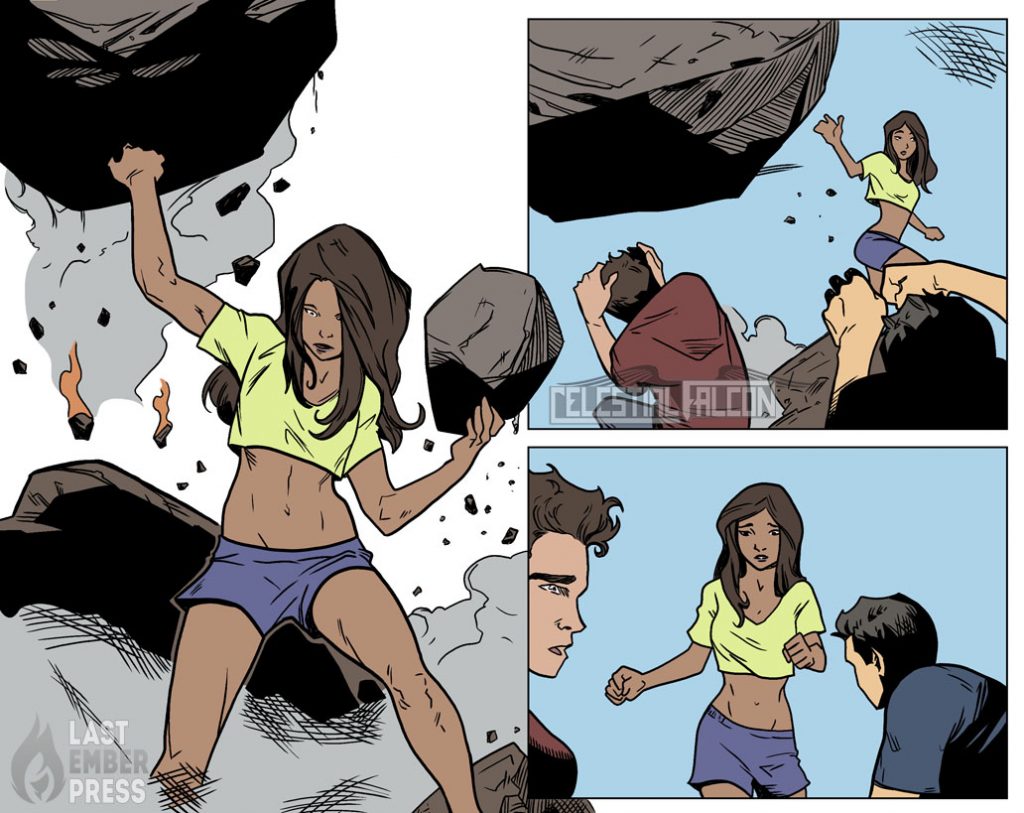 SAMANTHA “SAMI” MENDEZ
This girl is not taking a backseat to Chris, aka Celestial Falcon anytime soon. She’s one of his best friends, and there’s much more to her than meets the eye. She’s a very strong person, in more ways than one! She is sweet but sassy, smart but loves to have fun. She knows she’s attractive, but never flaunts it. At the same time, she owns it. She would do absolutely anything for her friends, and as it turns out, the world! She’s definitely a character to watch!
http://lastemberpress.com/comics/celestial-falcon/ 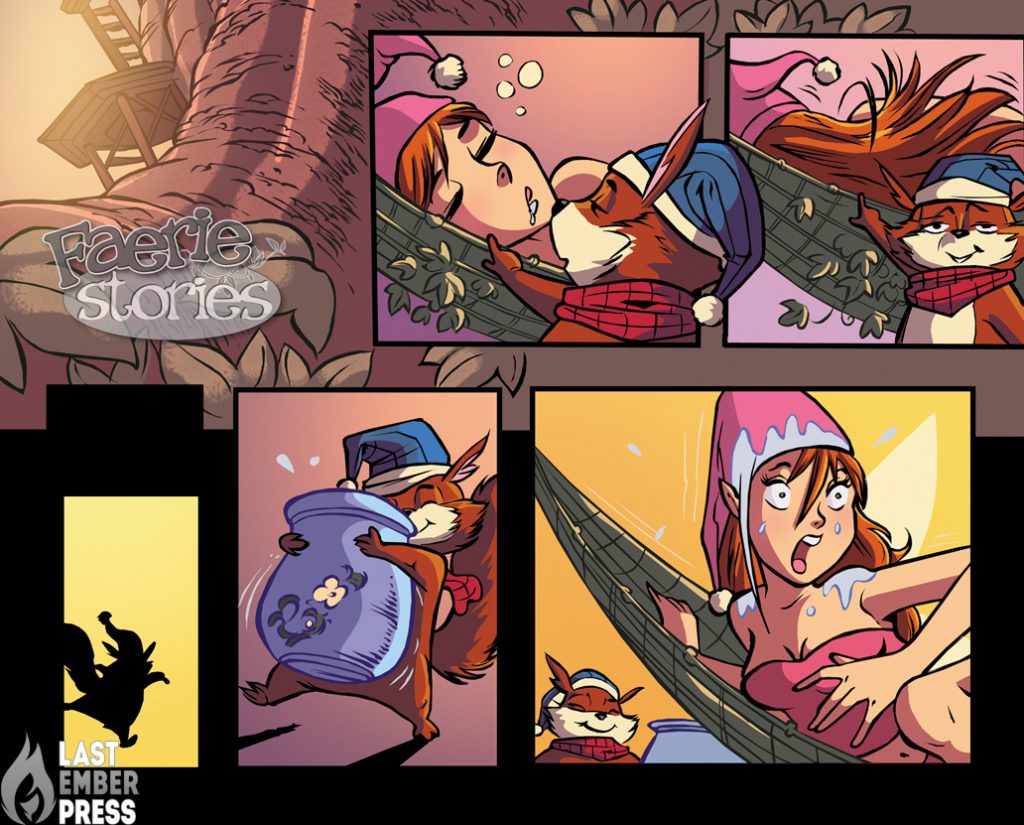 ALEX
Hidden away thinking she’s the last of her kind after many, many years, this faerie has learned to take care of herself. She’s quirky and imaginative, but works hard to maintain her home for herself and her chipmunk friend Kai. When she comes across another of her kind, her mind races with the possibilities before her. Anyone would be hard pressed to keep up with Alex. And when she discovers the truths hidden from her all these years, she’s going to step up in a whole new way. Is she up for the challenges ahead? You bet she is!
http://lastemberpress.com/comics/faerie-stories/
Now for some of the “Little” Women of LEP!

BETHANY “BOO”
She may technically be dead, but that won’t ruin Boo’s day! She is determined to find a place to live as her story begins, and thus begins a grand series of adventures for the intrepid ghost. She’s outspoken, driven and almost parental compared to her new roommates, but in the most lovingly way possible!
http://lastemberpress.com/comics/fireside-tales/ 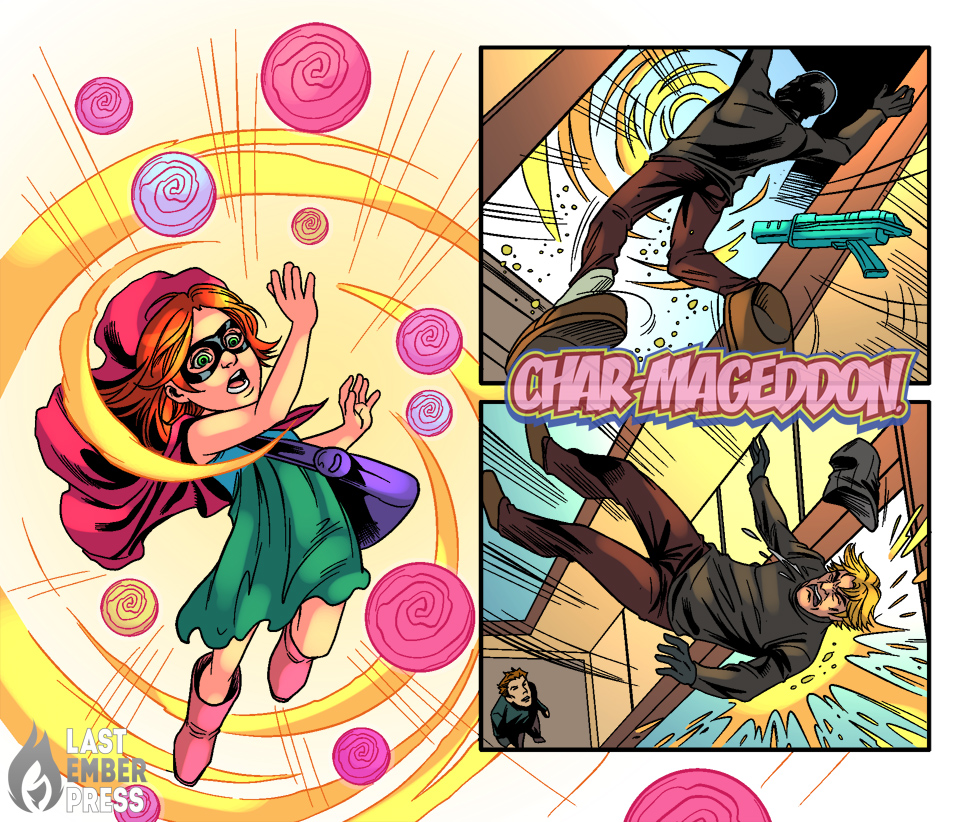 CHAR-MAGEDDON
Charlotte is your typical nine-year-old girl. Almost. She plays with dolls, plays video games, and occasionally beats up on some criminals! She alone is her town’s secret protector, embued with amazing powers and the (in)ability to never go through a door the proper way! She loves her town and everyone in it, and is as sweet as can be. But you cross her friends and family, and you better have your medical insurance paid up!
http://lastemberpress.com/comics/fireside-tales/
And now for the women behind LEP! 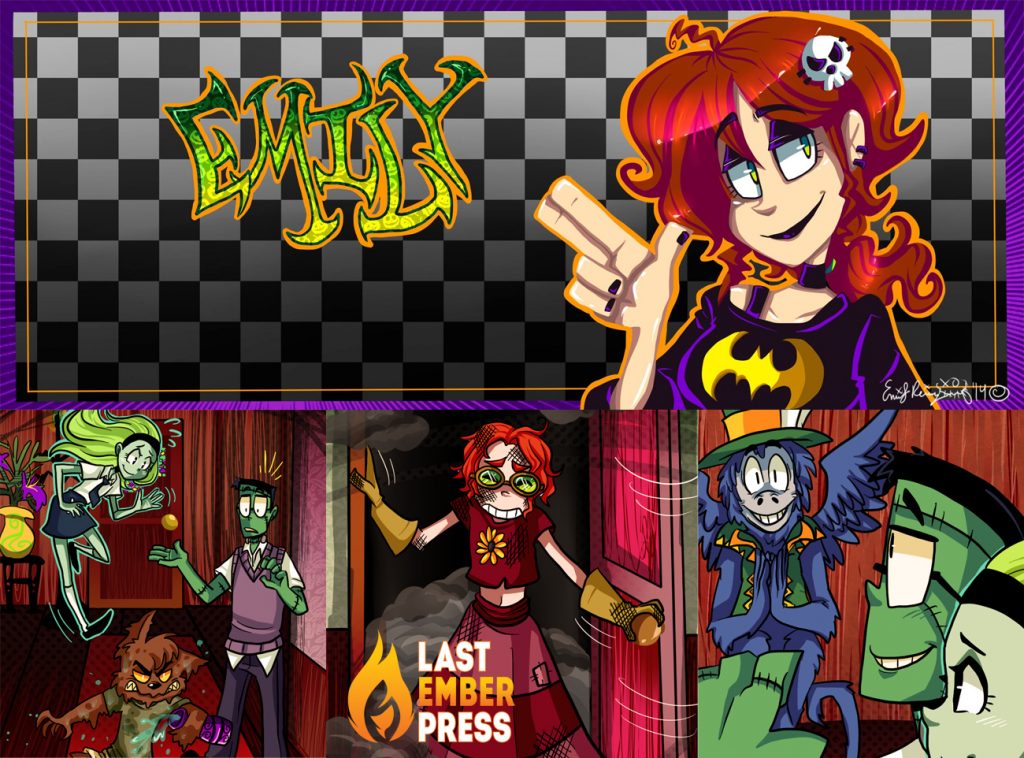 EMILY RESINGER
Emily is the amazing artist behind EEK! Li’l Monsters, and the upcoming Ghombie. Her talent speaks for itself, as is evidenced in EEK! and in all her work in her DeviantArt portfolio (linked below). She has been so great to work with. She has strong convictions on how her art is presented, but she’s also very easy to work with. She is a valued part of the LEP family and we couldn’t imagine the company without her.
http://fearcrowz.deviantart.com/ 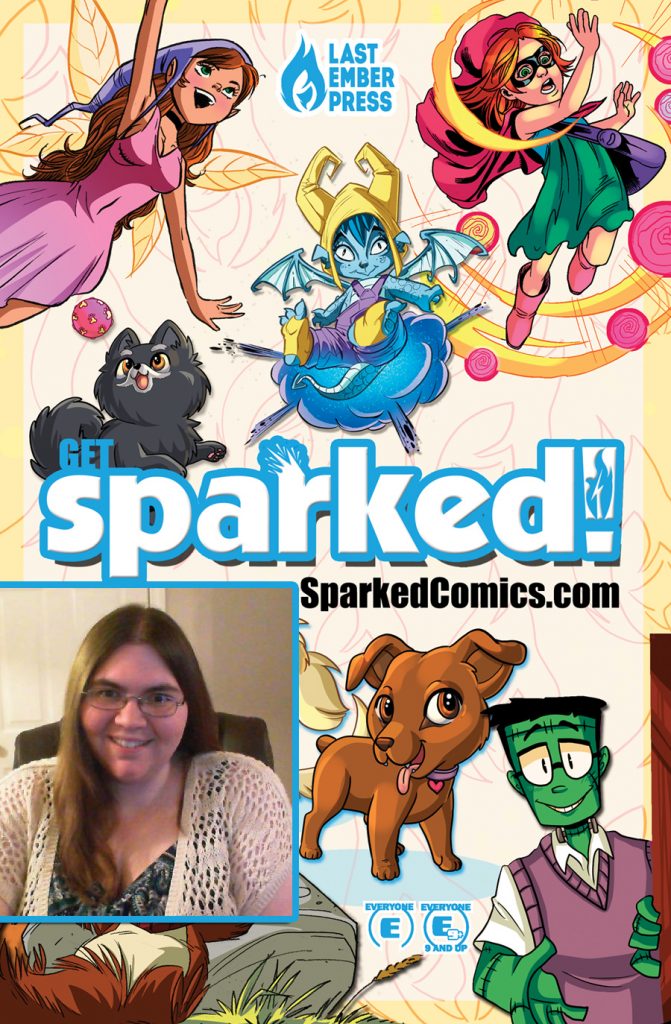 LISA MOORE
Co-Founder of LEP, and the one who came up with the idea in the first place. I may be the so-called “face” of the company, but the company would not exist and could not succeed without her at the helm! Her dedication and committment to the quality, professionalism and creativity of LEP is a big part of what keeps it running. She handles the finances, the convention planning, and much more, all while inking, flatting, coloring and writing for the company. She’s quiet, a bit shy, but she’s also fierce and one of the strongest and sincerest people I’ve ever met.
http://www.hueville.net
As you can see, we have some pretty strong women in LEP, both on the page and behind the scenes. And as we grow, you’ll see more and more of the same!
I hope you’ve enjoyed this little peek into what makes the Women of LEP so great!
Until next time, stay toasty!
-Brant